St Malachy's Prophecy of the Popes 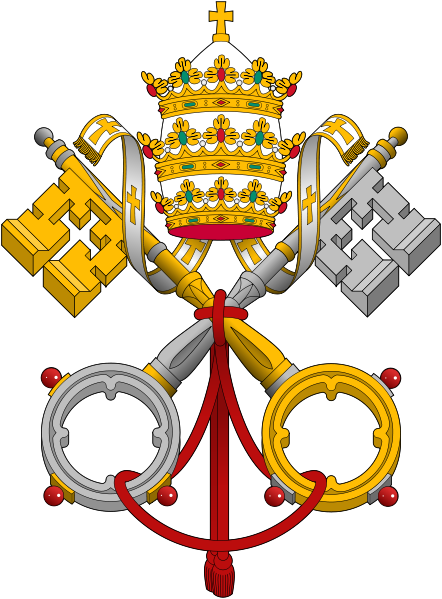 The Prophecy of the Popes is a list of 112 short phrases in Latin. They describe each of the Roman Catholic popes (along with a few anti-popes), beginning with Pope Celestine II (elected in 1143) and concluding with a later added pope described in the prophecy as "Peter the Roman", whose pontificate will end in the destruction of the city of Rome.

The prophecy was first published in 1595 by Arnold de Wyon, a Benedictine historian, as part of his book Lignum Vitæ. Wyon attributed the list of popes to Saint Malachy, the 12th‑century bishop of Armagh in Ireland.

According to the traditional account, in 1139, Saint Malachy was summoned to Rome by Pope Innocent II. While in Rome, Malachy claimed to have experienced a vision of the future popes, which he recorded as a sequence of cryptic phrases. This manuscript was then deposited in the Roman Archive, and thereafter forgotten about until its rediscovery in 1590.

Interpretation of the mottos has generally relied on finding correspondences between the mottos and the popes' birthplaces, their personal arms, and the events of their pontificates. For example, the first motto, Ex castro Tiberis (From a castle on the Tiber), fits Pope Celestine II's birthplace in Città di Castello, on the Tiber.

It is notable that where the interpretation of the prophecy is clear (as is the case for almost all of the Popes prior to 1590), the reference is almost always to some characteristic possessed by the Pope prior to assuming the Papacy—e.g., his birthplace, his arms, his surname, or his cardinal see. However, for more recent Popes, efforts to connect the prophecy with the pope have often focused on the events of his pontificate. In recent times, some interpreters of prophetic literature have drawn attention to the prophecies, both because of their success in finding connections between the prophecies and recent popes, and because of the prophecies' imminent conclusion. Interpretations made before the elections of recent popes have not generally predicted their papacies accurately. 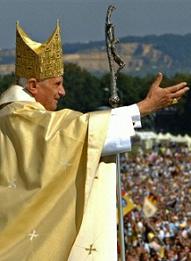 "De Gloria Olivae" or "glory of the olive", is the next phrase following "De labore Solis" in the manuscript.

* Prior to the papal conclave, this motto led to speculation that the next pontiff would be from the Order of Saint Benedict, whose symbols include the olive branch.

* Joseph Cardinal Ratzinger, elected in April 2005, is not a Benedictine, but did choose Benedict XVI as his regnal name, partially named after Benedictine founder Benedict of Nursia), which might be regarded as a fulfillment of this prophecy.

* On 5 April 1993, the future Pope Benedict XVI was installed as the cardinal bishop of Velletri-Segni. Velletri's coat of arms are emblazoned with three olive trees.

* Pope Benedict XVI was born on 16 April, the feastday of Saint Benedict Joseph Labre (26 March 1748 - 16 April 1783), also known as the Holy Pilgrim, with whom the Pope now shares both names, Benedict and Joseph. St. Benedict Labre, however, is not associated with olives, Olivetans or Mount Olivet in any way.

* Yet another possible interpretation might be that, like his predecessor — who spoke of the Church needing to "breathe with both lungs" again — Pope Benedict XVI has a special desire to reunite with the Eastern Orthodox churches, which have been separated since the Great Schism in 1054. The olive can of course be taken as a symbol of Greece, and hence the Greek Orthodox Church (and — by extension — the Russian Orthodox Church which grew out of it).

* Another interpretation was that "De Gloria Olivae" would promote world peace, as symbolised by the olive branch. In a general audience on 27 April 2005, Benedict XVI explained that he chose his regnal name as a link to Benedict XV, "Religio Depopulata", and that: "In his footsteps I place my ministry, in the service of reconciliation and harmony between peoples, profoundly convinced that the great good of peace is above all a gift of God, a fragile and precious gift to be invoked, safeguarded and constructed, day after day and with everyone's contribution."

* Some, who expect Pope Benedict XVI to restore order and discipline, namely, the "rule", Latin "regula", within the Catholic church, the "sheepfold", Latin "ovilis", whence "ovilia", the place where the sheep lay to rest. Consider the phrase to be an imperfect and ungrammatical anagram, "de regola ovilia" (correct Latin: de regula oviliae) or "of the rule of the sheepfold" for the counter-reformation he is expected to introduce.

The longest and final motto reads:

* In the original Latin:

* This translates into English as:

"During the final persecution of the Holy Roman Church, the seat will be occupied by Peter the Roman,
who will feed his sheep in many tribulations;
and when these things are finished, the seven-hilled city will be destroyed,
and the formidable Judge will judge his people.
The End."

This final statement is not found in the 1820 publication of the Prophecy of the Popes by Thomas A. Nelson; it is found in the 1969 re-edited version.

Several anti-popes claiming to be Pope Peter II have emerged in recent years, probably inspired by this motto. 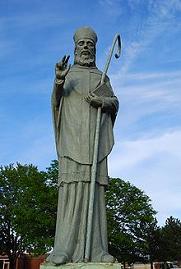 Not all Catholic theologians believe that Petrus Romanus will be the last pope ever, or that he will be called Peter II. Catholic apologist Ronald L. Conte Jr., who in 2002 correctly predicted that the pope immediately after John Paul II would be called Benedict XVI but incorrectly predicted that he would be black, believes that Cardinal Francis Arinze will take the name of Pius XIII after the death of Pope Benedict XVI, and that the description "Peter the Roman” means that the "Pope will reaffirm the authority of the Roman Pontiff over the Church; this authority is based on his place as a Successor of Peter" and "will emphasize the supremacy of the Roman Catholic Faith and the Roman Catholic Church above all other religions and denominations, and its authority over all Christians and all peoples of the world," and also will be “the last Pope for about a generation (until the 2040's) to rule from Rome." In Conte’s opinion, St. Malachy’s list ends with Petrus Romanus because his reign will coincide with the beginning of the first part of the Tribulation.

Some skeptical sources, including the most recent editions of the Catholic Encyclopedia, suggest that the prophecy is a late 16th‑century forgery. Some have suggested that it was created by Nostradamus and was credited to Saint Malachy so the purported seer would not be blamed for the destruction of the papacy. Supporters generally argue that, even if the author of the prophecies is uncertain, the predictions are still valid.


The following is an excerpt from the webpage biblebelievers.org.au/malachy

John Paul I (1978) - 109 - De medietate Lunae (from the midst of the moon).
Albino Luciani, born in Canale d'Ogardo, diocese of Belluno, (beautiful moon) Elected pope on August 26, his reign lasted about a month, from half a moon to the next half...

Benedict XVI (2005-) - 111 - Gloria olivae (from the glory of the olive)
Benedict means "Blessed by God." Prior to his elevation to the Purple, Joseph Alois Ratzinger was Prefect of the Holy Office of the Supreme Sacred Congregation of the Congregation for the Doctrine of the Faith (previously known as The Roman and Universal Inquisition). As a staunch defender of the Church his immediate personna is one of hard line orthodoxy. He is an opponent of homosexuality, same-sex marriage, euthanasia, and abortion. He would appear well-qualified to be pope of the cloven hoof (Revelation 17:10-11; 13:3-10 and I Thessalonians 5:3).

In persecutione extrema S.R.E. sedebit Petrus Romanus, qui pascet oues in multis tribulationibus: quibus transactis ciuitas septicollis diruetur, & Iudex tremêdus iudicabit populum suum. Finis. (In extreme persecution, the seat of the Holy Roman Church will be occupied by Peter the Roman, who will feed the sheep through many tribulations, at the term of which the city of seven hills will be destroyed, and the formidable Judge will judge his people. The End.)

According to the prophecy of Daniel 9:27 and Revelation 13 and 17:10-18, the last pontiff will be the Devil-incarnate, and he will break Rome's covenant with the Jewish bankers. It seems Malachy made only 111 predictions so that John Paul II's successor, "Gloria Olivae" should be the final pope. It appears the Benedictines devised pope 112 to dissociate their order from the "Beast".

Prophecy of The Popes Links of Interest

Prophecy of the Popes
Here is the Wikipedia.com Article explaining in more detail about the Prophecy of The Popes. You can read all of the actual predictions here along with some interesting background information, Interpretations, and resources.

Legends surrounding the papacy
The papacy has been surrounded by numerous legends. Among the most famous are the claims that the Papal Tiara contains the number of the beast inscriptions on the Tiara, that a woman was once elected pope, or that current pope, Benedict XVI, will be the penultimate Pope. .

Pope Benedict XVI and the Rose Prophecy
An interesting webpage that discusses the rose prophecy of Quatrain 2.97 and the related Third Secret of Fatima. It describes how it may apply to the newly-elected Pope, and other prophetic issues.

Saint Malachy
St Malachy or was the Archbishop of Armagh, to whom we attribute several miracles and of course the vision of the identity of the last 112 Popes. He was Canonized by Pope Clement III, on July 6, 1199, the first Irish Saint to be Canonized.

The Ancient Malachy Prophecy
This Lampholder edition briefly looks at Catholic prophecy and the prophecy of St. Malachy. Non-Catholics may find this portrayal of Catholic prophecy very interesting because of an interest in eschatology and other Biblical end-times prophecy.

The End Times in Various Religions