Exploring the seven spiritual energy centers of the human body and how they each relate to the mind and body.

The Chakras are "force centers" or vortices of spiraling energy that permeate from specific points on the physical body. The word Chakra is a Sanskrit term that actually means "circle" or "wheel" ("Wheel of Energy"). 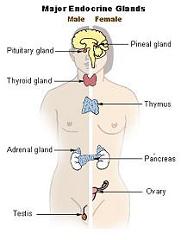 There are seven major chakras centers each located within the subtle or spirtitual body. These energy centers flow along the spine located at major branchings of the human nervous system, beginning at the base of the spinal column and moving upward to the top of the skull.

The chakras interact with the body's ductless endocrine glands and lymphatic system by feeding in good bio-energies and disposing of unwanted bio-energies.

Chakras are considered to be a point or nexus of biophysical energy or prana of the human body. prana is the basic component of your subtle body, your energy field, and the entire chakra system - the key to life and source of energy in the universe.

The chakras are considered the focal points for the reception and transmission of energies. Each of the seven Chakras sends the Energy of Life (Prana) to corresponding areas of our physical, mental, or spiritual bodies. When the Chakras are blocked, illness, emotional problems, or spiritual deficiency can result.

Through awareness and focus of the chakras, including meditative practices, the chakras can be balanced, bringing harmony to the mind-body.

The practice of Yoga helps to clear the Chakras so that Prana (Energy of Life) can flow freely and bring harmony and enlightenment. The philosophical theories and models of chakras as centers of energy were first codified in Ancient India.

This first Chaka is located at the base of the spine, at the perineum/coccyx area, and it's name is Muladhara.

It's color is red and it's element is Earth. Gemstones that represent this Chakra are Ruby and Garnet. Muladhara is Symbolised by a lotus with four petals.

In the body the Root Chakra is associated with the inner adrenal glands, the large intestine, skeleton system (teeth and bones), the bladder and elimination system, and the lower extremities in general (feet, legs , etc.)

The Root Chakra is our support and foundation and concerns our relationship with physical reality, the Earth(being grounded), natural forces, the body and our ability to master it. It represents our primal Instincts, our security, survival and fight our flight response. It also represents human potential.

This Second Chaka is located in the lower abdomen (below the naval )and it's name is Swadhistana.

It's color is orange and it's element is Water. Gemstones that represent this Chakra are Amber and Coral. Swadhistana is Symbolized by a lotus with six petals

In the body the Sacral Chakra is associated with the genitals, the sex/reproductive system/organs (Ovaries/testes), and bladder, and Kidneys, and the circulatory system

The Sacral Chakra is related to our base emotions, sexuality and Intimacy, passion and pleasure, and the act of giving and receiving. It is also associated with creativity, with the balancing life forces of the male/female or Yin/Yang.

This third Chaka is located in the stomach area above the navel and below the chest.), and it's name is Manipura.

It's color is yellow and it's element is Fire. Gemstones that represent this Chakra are Amber and Gold. Manipura is Symbolised by a lotus with ten petals.

The Solar Plexus Chakra is related to Personal Energy, our Sense of Purpose, and the forces of power and authority. It can also be considered the transformation of internal energy to manifest power within the external world, self-esteem, will and desire, and also self-control and discipline of the ego.

This fourth Chaka is located at the Center of chest, and it's name is Anahata.

It's color is green, and (sometimes Pink), and it's element is Air. Gemstones that represent this Chakra are Emerald and Malachite and the Sense of touch. Anahata is Symbolised by a lotus with twelve petals.

The Heart is related to complex emotions of the heart, and is associated with love of self and others, and universal love, It involves compassion,understanding, sensitivity, trust, Forgiveness , and growth. It also symbolizes freedom, harmony and peace.

This Fifthh Chaka is located at the front of the neck,and it's name is Vishuddha.

It's color is blue, and (sometimes Pink). Gemstones that represent this Chakra are Turquoise and Blue Topaz. Vishuddha is Symbolised by a lotus with sixteen petals

In the body the Throat Chakra is associated with the base of neck and throat , the thyroid, lungs, the voice and sound.

The Throat is related to Creativity, Communication, and Self Expression. and is the link between emotion and thought. It is also associated with truth and knowledge; honesty, kindness and wisdom that is conveyed through speech and other means of communication.

This sixth Chaka is located at the forehead between the eyes/brows, and it's name is Ajna.

It's color is indigo/deep blue, and (sometimes Pink). Gemstones that represent this Chakra are Lapiz Lazuli and Sapphire. Ajna is Symbolised by a lotus with sixteen petals

In the body the Brow Chakra/Third Eye is associated with the Pituitary Gland, the base of the skull, eyes, nose,face,nervous system and brain

The Third Eye Chakra is related to Psychic abilities/E.S.P and Vision, intuition, insight, imagination. It is the mind - spirit connection, Inner Spirit,Spirituality, divine wisdom and peace of mind. It can also be considered the subconscious or unconscious, and our perception beyond the physical realm.

Ajna is held as the chakra of time, awareness and of light. The pineal gland is a light sensitive gland that produces the hormone melatonin which regulates sleep and awakening.

*(Note: some opine that the pineal and pituitary glands should be exchanged in their relationship to the Crown and Brow chakras, based on the description in Arthur Avalon's book on kundalini called Serpent Power or empirical research.)

This seventh Chaka is located on the top of the head, extending outward and outside the physical body,and it's name is Sahasrara.

It's color is violet, and (transforming to white and sometimes gold as it extends further from the body). Gemstones that represent this Chakra are Amethyst, Diamond and Quartz Crystal. Sahasrara is Symbolised by a lotus with one thousand petals

In the body the Crown Chakra is associated with the pituitary gland, upper skull, cerebral cortex, mind and spirit, and with the entire body as a whole.

The Crown Chakra is related the Spiritual and divine, and to our higher selves. It also associated with inspiration,wisdom and integration of our eternal selves with our current physical selves. It is the exploration of one?s consciousness, and connection to god or source.

Sahasrara or the crown chakra is generally considered to be the chakra of consciousness. Its role may be envisioned somewhat similarly to that of the pituitary gland, which secretes hormones to communicate to the rest of the endocrine system and also connects to the central nervous system via the hypothalamus. The thalamus is thought to have a key role in the physical basis of consciousness.

(Note: some opine that the pineal and pituitary glands should be exchanged in their relationship to the Crown and Brow chakras, based on the description in Arthur Avalon's book on kundalini called Serpent Power or empirical research.)

The Spectrum of Light & the Chakras

Mercier introduces the relation of color energy to the science of the light spectrum;

"As humans, we exist within the 49th Octave of Vibration of the electromagnetic light spectrum. Below this range are barely visible radiant heat, then invisible infrared, television and radiowaves, sound and brain waves; above it is barely visible ultraviolet, then the invisble frequencies of chemicals and perfumes, followed by x-rays, gamma rays, radium rays and unknown cosmic rays.

Understanding existence and physical form as an interpretation of light energy through the physical eyes will open up greater potential to explore the energetic bounderies of color, form and light that are perceived as immediate reality. Indian Yogic teachings assign to the seven major chakras specifac qualities, such as color of influence (from the 7 rays of spectrum light), elements (such as earth, air, water & ether), body sense (such as touch, taste, and smell), and relation to an endocrine gland.

The study of the Chakras is central to many different therapies and disciplines. Subtle energy is explored through practices such as aromatherapy, mantras, Reiki, hands-on healing, flower essences, radionics, sound therapy, color/light therapy, and crystal/gem therapy, to name a few. Acupuncture, shiatsu, tai chi and chi kung focus on balancing the energetic meridians that are an integral part of the chakra system, according to Vajrayana and Tantric Shakta theories. Several models will be explored in the following sub-headings.

In Hinduism, the concept of chakras is part of a complex of ideas related to esoteric anatomy. These ideas occur most often in the class of texts that are called Agamas or Tantras. This is a large body of scripture, most of which is rejected by orthodox Brahmins.

There are many variations on these concepts in the Sanskrit source texts. In earlier texts there are various systems of chakras and nadis, with varying connections between them. Various traditional sources list 5, 6, 7, or 8 chakras. Over time, one system of 6 or 7 chakras along the body's axis became the dominant model, adopted by most schools of yoga. This particular system may have originated in about the 11th century AD, and rapidly became widely popular. It is in this model where Kundalini is said to "rise" upward, piercing the various centers until reaching the crown of the head, resulting in union with the Divine.

The chakras are described in the tantric texts the Sat-Cakra-Nirupana, and the Padaka-Pancaka , in which they are described as emanations of consciousness from Brahman, an energy emanating from the spiritual which gradually turns concrete, creating these distinct levels of chakras, and which eventually finds its rest in the Muladhara chakra. They are therefore part of an emanationist theory, like that of the kabbalah in the west, lataif-e-sitta in Sufism or neo-platonism. The energy that was unleashed in creation, called the Kundalini, lies coiled and sleeping at the base of the spine. It is the purpose of the tantric or kundalini forms of yoga to arouse this energy, and cause it to rise back up through the increasingly subtler chakras, until union with God is achieved in the Sahasrara chakra at the crown of the head.

From the Wikipedia article about

Chakras for Beginners
A great book By David Pond that you can read online.

Chakra Meditation
A powerful and effective Chakra meditation that will help recharge your mind and body.

Chakra Test
Take this free chakra test to find out how open each of your seven chakras is. The questionnaire consists of 56 question

Chakra Therapy - Balancing With Colors and Sound
The colors of your chakra can say a lot about a person, their current emotional state, their state of health and well-being, and more.

Wheels of Life ~ Our Magnetic Energy System
More detailed explanations of each of the chakras.

Yoga and Chakras
More information on Chakras and Meditation including each Chakra's color, sound, element, sense and planet.

Chakra Balancing
Exploration of chakras. Offered here are resources to help our understanding of the funnel shaped energy centers (also called vortexes) that are the openings for life energy to flow into and out of our auras.

Chakra Portholes
An overview of each of the seven chakras and associations with each, along with a technique for the Chakra Energy Porthole.