Brain Waves and States of Consciousness

Brain Waves were discovered in the 1920s by German researcher Hans Berger and are a form of electrical activity that emanates from the brain.

Your brain is made up of billions of cells called neurons. These brain cells use electricity to communicate with each other, just like how the cells in your body interact with each other to perform various tasks. With millions of neurons sending out signals at once, enormous amounts of electrical activity in the brain is produced. This electrical activity can be detected by various methods such as EEG, which measures electricity levels over areas of the scalp.

The combination and wave-like pattern of this electrical activity in the brain is called a appropriately called a "brainwave pattern".These brainwaves are constantly occurring in your brain and various frequencies, and the type of wave that is being produced depends on the activity you are doing. Our brains cycle through several types of brain waves, referred to as Delta, Theta, Alpha, Beta and Gamma.

Each type of brain wave represents a different speed of oscillating electrical voltages in the brain, and you usually cycle through most of these on a daily/nightly basis. If you are in a calm or relaxed state of mind while concentrating on these words that your brain is most likely producing beta waves. Delta waves usually occur during deep sleep. You can also learn to alter and control your own brain waves through various techniques such as meditation or visualization.

Remember that your mind in turn effects your body, and so by observing your current state of mind at any time during the day you can alter your body in subtle ways. It also works the other way around (mind-body connection). When you become aware of your body, you can then alter your thoughts accordingly to create a change in these brain wave patterns.

Electroencephalography (EEG) is the measurement of electrical activity produced by the brain as recorded from electrodes placed on the scalp.

Just as the activity in a computer can be understood on multiple levels, from the activity of individual transistors to the function of applications, so can the electrical activity of the brain be described on relatively small to relatively large scales.

Most of brain signals observed in the scalp EEG falls in the range of 1-20 Hz (activity below or above this range is likely to be artifactual, under standard clinical recording techniques).

Electroencephalography
Wikipedia Article on the EEG, how it works, it's uses, and about scientific explanation of Brain Waves states and their effects. 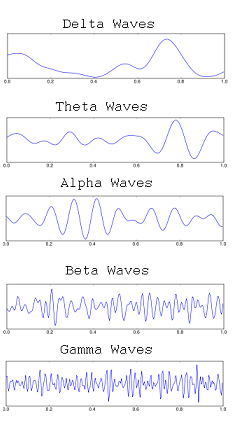 Delta is the frequency range up to 3 Hz. It tends to be the highest in amplitude and the slowest waves. It is seen normally in adults, usually occurring during sleep. It is also seen normally in babies. Delta waves our produced when we are in an unconscious state of mind, and the sleep stages where no dreaming occurs.

Theta is the frequency range from 4 Hz to 7 Hz. Theta is seen normally in young children. It occurs during drowsiness or arousal in older children and adults. Theta Waves are produced during deep states of relaxation, meditation and visualization. It can also occur during hypnosis or trances It can be associated with the subconscious.

Alpha is the frequency range from 8 Hz to 12 Hz. Hans Berger named the first rhythmic EEG activity he saw, the "alpha wave." This brain wave can be brought about by just closing the eyes and relaxing. Alpha Waves occur during REM sleep whenever we are dreaming. Our brains are producing Alpha Waves when we are calm and content, and during periods of relaxation and creativity. Alpha Waves also occur when we are daydreaming.

Beta is the frequency range from 12 Hz to about 30 Hz. It is the dominant rhythm that occurs when we have our eyes open as we go about our day to day acitivities in a normal waking state. Our Brain produced Beta waves when we are busy, active, thinking and problem solving, and when we are focused and concentrating on something. Beta Waves also occurs during times of stress or when we are anxious.

Gamma is the frequency range approximately 26100 Hz. Because of the filtering properties of the skull and scalp, gamma rhythms can only be recorded from electrocorticography or possibly with magnetoencephalography. These waves are involved in higher mental activity and processing of information. Those who are advanced in meditation tend to produce higher levels of gamma than non-meditators both before and during meditation.

All About Sleep and Dreams
About the different types and stages of sleep, including lucid dreaming, polyphasic sleep, sleep disorders.

Lucid Dreaming
A lucid dream is a dream in which the person is aware that he or she is dreaming while the dream is in progress, also known as a conscious dream.

Brainwave Exercises
These brain-training exercises are formatted as stimulating puzzles. They are designed to help develop mental skills in several ways.

Brain Wave States
More detailed explanations of each Brain Wave state. Understanding brain waves allows us to alter our state of consciousness. From altered states of consciousness, we can tap into our psychic abilities...

See also: All About Sleep