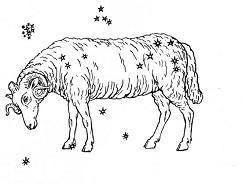 The Aries individual is assertive, brave, energetic, kind, action-oriented, intelligent, individualistic, independent, impulsive, full of strength, competitive, eager, straightforward, forceful, headstrong, pioneering, a leader, focused on the present and freedom-loving. They can also sometimes be intemperate, violent, impatient, fiery, rash, extreme, and arrogant. Aries is the cardinal, fire, masculine sign of the zodiac. Aries is symbolized by the Ram. The ruling planet of Aries is Mars, which is the planet of war and aggression. The fire form of Aries is a wildfire, an uncontrolled fire. The key phrase for Aries is: "I am".

About The Aries Personality

If you were born with the Sun in Aries, you are headstrong and pioneering. The Sun Sign of Aries symbolizes new beginnings. You are a doer rather than a thinker. You love to "plunge right into" new situations and you usually tackle projects head on. You love the thrills and chills of it all. You appear to b e exciting, energetic and outgoing. Aries likes to be in the center of where the action is. Aries is born to be a leader in some way or another. You appear to have a lot of self-confidence in your actions.

Even from a young age you feel that success looms just over the horizon. You tend to butt-down the obstacles that stand in your way. When it come to something you want you can brush off unwanted problems and opposition. You want to follow your dreams and when you have a specific goal in mind you pursue it with energy and enthusiasm. The Aries Sun Sign willing to gamble, and take risks. They love adventures and may even love extreme sports. On the outside Aries can seem very optimistic and this quality attracts other people to them.

Aries can be a little insecure deep down inside, although they wouldn't want anyone to know about it. Aries can get a spell of depression and can even be moody at times, but these dreary feelings don't tend to last very long. You don't like being defeated by anything so you get back on your feet and back to your confident and optimistic self pretty quickly. You may bend, but you never break. You have an aggresive and combative spirit that no one can take away, except you.

Aries can get very impatient if they can't dive right into a situation at once. They also get bored very easily if they can't make quick progress or if they don't see results right away. They may run off in search of a new project or adventure, a new situation to conquer, a new problem to tackle, and a new mountain to climb. You as an Aries, may have a reputation for not finishing what you have started. This can give an advantage to the patient and more dedicated signs of the zodiac, such as Taurus the Bull. 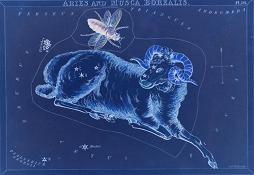 In social situations Aries has a tendency to dominate and sometimes can talk too much. They can also be very opinionated at times. Sometimes this sign speaks without thinking and then regrets it later. Sometimes your put too much energy into too many things at once. But when you focus your efforts and actually become dedicated to something, usually a good cause you believe in, or an important goal you have set for yourself, you become courageous in your efforts and usually achieve your vision.

An Aries Sun Sign can sometimes become easily offended when slighted by others. This may encourage an agressive or fiery temper. Younger Aries are known for throwing tantrums and being unruly when they don't get what they want, or when they feel hurt by someone else's actions. You sulk at the thought of having to take orders from someone else. You want to be the boss and give out orders. You need to be able to show off your brilliance. Aries can sometimes be quite selfish and have an "it's all about me" type of attitude.

You are generally a very sincere and honest person, but you would be willing to tell a white lie if there was somehow an advantage to it, although your not very good at deception and others can see right through it sometimes. You don't mean harm to others but sometimes you just don't play well with others. Aries can be very competitive, but they can also be impulsive and tactless. It's your carelessness and forceful nature that can leave you at a disadvantage.

Aries does tend to be lucky where money is concerned, but may be impulsive in that area as well. They love to live extravagantly at times and sometimes take risks with money. This can lead to debt, but you have so much pride that you find a way pay back what you owe. Aries can be very generous with their friends and loved ones whenever they are in need, but they love openly getting credit for these good deeds of theirs.

Aries is overall a very creative and high-spirited individual. They are pioneering and straight-forward, sometimes impatient, little vein, and little too feisty at times. Sometimes it's just hard for others to keep up with you.

Symbol and Glyph - The Symbolic representation for Aries is the Ram:

The Aries glyph symbol is -

It represents the head and horns of a Ram.

Ruling Planet- In Astrology, Aries is ruled by the planet Mars. Astrologically Mars is associated with confidence and self assertion, aggression, sexuality, energy, strength, ambition, impulsiveness, passion and action. Mars also governs sports, competitions and physical activities in general. The influence of mars over Aries may encourage tension, involvement in violent or dangerous situations, and accidents involving fire, sharp objects, high speeds. Mars is also known as the ancient Roman god of war and bloodshed.

Anatomy - In Medical Astrology Aries represents the head and face. Aries is associated with the following parts of the body: the skull, brain, jaw and facial bones, upper teeth, eyes, muscles. Aries is prone towards headaches and minor injuries near the face and head, and there is a danger of accidents involving fire, sharp objects, high speed, and involvement in violent or dangerous situations. Many Aries and Aries Ascendents have a birthmark or mole around the face area.

Duality - Aries is considered a Masculine sign. The other masculine signs of the zodiac are Gemini, Leo, Libra, Sagittarius, and Aquarius.

Element/Triplicity - Aries is a Fire sign. Fire signs are active, energetic, and enthusiastic. The other 2 fire signs of the zodiac are Leo and Sagittarius.

Occupations and Talents - Aries natives do well in occupations that are challenging, exciting, competitive and entrepreneurial. They have natural leadership abilities and do well under pressure; they also get bored of routine work very easily. Careers well suited for an Aries are: business and management positions, advertising and sales jobs, military, law enforcement, government positions, medical professions, rescue work, construction, and any athletic field.

*Under the Tropical Zodiac, Aries is occupied by the Sun from about March 21 to April 19 and is associated with the Spring Equinox. In tropical astrology Aries always marks the cusp of the first house. Under the alternate sidereal zodiac the date for Aries is currently from April 15 to May 15 and is largely associated with the actual constellation Aries. Sidereal Astrology follows the movement of the sun through the observable constellations as opposed to the traditional tropical method which focuses on the symbolism of each of the original zodiac signs, as they were develped in the early astrology.